Our staff and level of customer service is our greatest asset

Long before brand name pharmacies dominated the Sunshine Coast, Mooloolaba Beach Pharmacy was servicing the individual needs of locals and tourists alike along the Esplanade. And whilst the products have certainly changed since the doors first opened in the 1950s, the vision of providing individualised healthcare with respect and dignity have absolutely not. In fact, walking into the Mooloolaba Beach Pharmacy is like receiving a warm hug from your grandmother after grazing your knee… followed by a rather direct line of questioning about whether you put sunscreen on, have you reapplied and where is your hat?

This isn’t a faceless pharmacy, but a team of passionate locals working together to serve our community. And that community encompasses everyone who loves Mooloolaba just as much as us, whether they’re visiting for the day, the week or live and work in the area.

Mario, along with his family, have built the Mooloolaba Beach Pharmacy into a local identity, a place where people feel comfortable and taken care of. After fifty years, Mario can still be found from time to time behind the front dispensary, greeting customers like old friends because they are … or soon will be!

We encourage staff training and education

Stepping into Mario’s shoes with greater frequency is his business partner, Jo Host, another UQ graduate who is a self-confessed pharmacy nerd, mother of three and Sunshine Coast foodie and homewares connoisseur. Jo is also at the forefront of the push to eco-friendly and organic products, as well as sustainability within the practice itself. She brings a fresh, encouraging and nurturing energy to the Pharmacy, one which she says permeates all her staff. ‘We are one big family, and once someone begins working here, they rarely leave. They love it because this is a great place to work!’

The Pharmacy offers and provides training to all staff in Certificate III and IV Pharmacy, something Jo and Mario are passionate about. Intern Pharmacists can often be found here, students from local high schools are welcomed on work experience and all staff are encouraged to further their training so as to better care for customers. 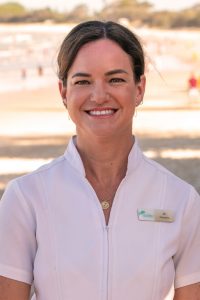 Having been passionate about helping people since childhood, Jo always knew she would work in the healthcare industry, with pharmacy the perfect fit. Her very first job once she graduated from the University of Queensland in 2002 was with Mario. She recalls leaving  to travel overseas a few years later and thinking, I’m leaving the best job I’ll ever have! After travelling the world, she returned in 2010 and now 18 years after her journey at Mooloolaba Beach Pharmacy began, she is a part owner.

Jo brings an effervescence to everything she does, especially in regards to healthcare and pharmacy, with this hardworking and caring pocket rocket a huge asset for the Mooloolaba Beach Pharmacy. Incredibly loyal and pragmatic, when she says, ‘this is the best pharmacy on the Sunshine Coast!’ you believe her and not just because of her enthusiasm, but because she backs up her statement with the facts: ‘The entire team is so passionate about the healthcare needs of our local community and tourists that visit here. We have a great range of stock, offer a huge range of services and truly care about each and every one of our customers like they are our own family… oh and we have the best view of the ocean from the Pharmacy!’

Jo truly cares for her customers, and is not the type to stand behind screens of bottles and boxes. She is out, front and centre, helping and listening to every individual need of each of her customers.

With a huge interest in nutrition and three children under the age of 11 she is also running a healthy and busy household. There’s always a travel adventure in the planning for Jo’s family! Not one to hold back on exciting experiences, in 2019, she was climbing volcanoes in Papua New Guinea with her then six week old son strapped to her chest.

Jo is also a passionate supporter of Breast Cancer Awareness and Screening, the ‘Love Your Sister’ organisation and donates locally to Bloomhill at Buderim. 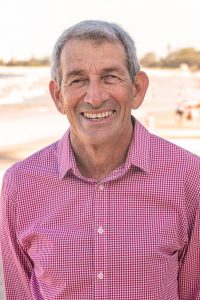 As an original owner of the Mooloolaba Beach Pharmacy, Mario not only carries over half a century of experience and professionalism in pharmacy, he is a local icon.

Interested in pharmacy from a young age, Mario graduated from the University of Queensland in 1970, returning to his hometown of Innisfail to work. A three-month locum in Mooloolaba in 1974 sealed his fate in the area, ‘I was immediately mesmerized by this laid-back fishing village and occasional holiday destination. I just never left.’

Married to Carmel with four children and 1500 kilometres away from relatives, the Mooloolaba community became their family, one built on trust and belief.

In the early days of Mooloolaba Beach Pharmacy, dispensing in a town with only one part-time doctor presented business problems. Mario began building a rapport with other local professions, notably the local fishing industry. ‘They required first aid kits and many times we accepted an esky of prawns as payment.’ He also paid particular attention to visitors who returned year after year and who would often became permanent residents and customers.

As an owner, Mario understands the greatest asset to business is his staff. He leads from the front, careful to meet the needs of female staff in particular regarding pregnancies, school hours and children. Of his staff, Mario says, ‘I respect their opinion, am non-judgemental and always try to help in a positive way,’ ensuring he is also a much loved member of the team.

Ever the community man, Mario has been actively involved in volunteering for Rotary for the past 30 years, running the yearly bowel cancer screening and awareness campaign and is the coordinator of the Alexandra Headland foreshore conservation group. He has worked on kindergarten and school committees, charities like St Vincent de Paul Society and is a member of the Chamber of Commerce.

Mario lives and breathes the outdoors with surfing, snowboarding, cycling and getting out in garden regular past times. One of his greatest challenges was walking the Kokoda Track and Great Ocean Road, which in retrospect, he admits, is fairly insignificant compared to raising four children and nine grandchildren. 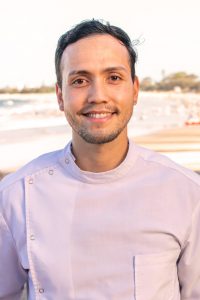 Finishing high school with an interest chemistry led this Mooloolaba local to a Bachelor of Pharmacy at the University of Queensland. Now back living and working on the beach he grew up on, Robert is an integral part of the Mooloolaba Beach Pharmacy team. This unflappable young man brings a calm and adaptive nature to his work, enjoys the customer centred focus of the Pharmacy and appreciates the family-like nature of the team.

Efficient and thorough Robert, brings experience and practical care to everything he does.

As an avid foodie, he has an intimate knowledge of the local culinary scene… though it’s best not to get between him and an eggplant chip. ‘I’ll do anything to get my hands on it!’ 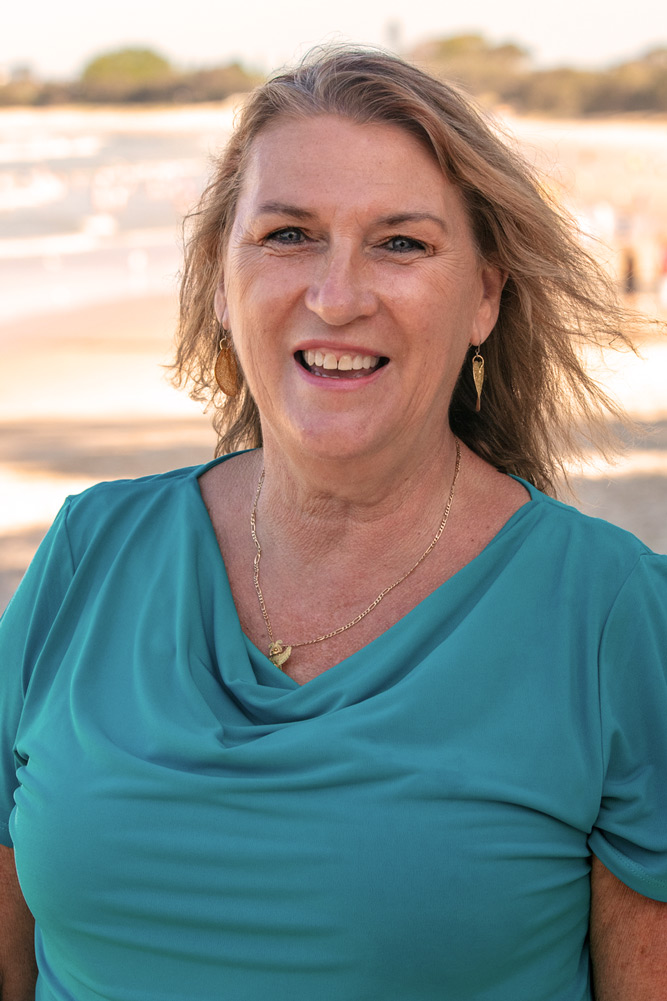 Having worked in the health care industry all her life, and with impressive experience, knowledge and training, Terry is a highly valued member of the Mooloolaba Beach Pharmacy team. It’s not simply because of her abilities however, but for the passion, honesty and trustworthy way she goes about her work. Having been part of the Pharmacy for over 11 years, Terry’s customers aren’t just clients, they’ve become her friends.

With a nursing background and as a team member who delivers medication to customer homes, Terry’s wonderful combination of sincerity, trust and confidentiality are highly valued qualities in the Pharmacy team. She has held roles in pharmacy, general practice and treatment room management.

Terry loves supporting her local community, especially the Coast’s Surf Clubs, and can’t wait to own a motorhome and travel all over Australia. 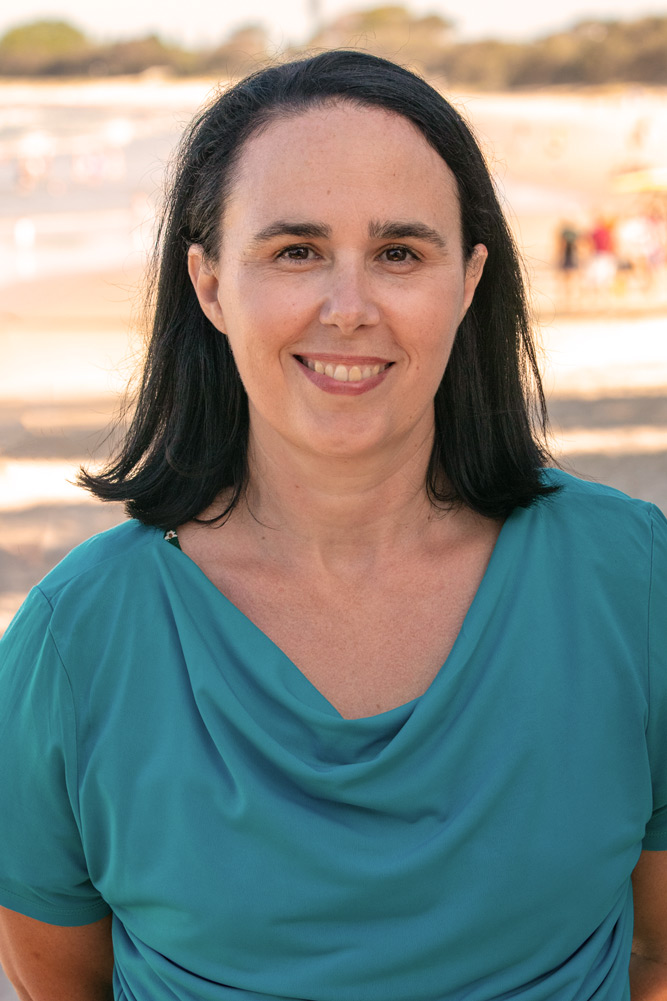 From the wintry skies of Dublin to the warm shores of the Sunshine Coast, Nichola has brought her love of natural health to Mooloolaba Beach Pharmacy. Considering herself a local for over 12 years, her caring nature and joy in working with people is obvious to both her colleagues and customers.

As a homeopath, caring for the health of others in a natural and holistic way is paramount to Nichola.

When she’s not looking after the health of her customers or helping out at her children’s school Nichola can be found at the beach, coffee in hand. 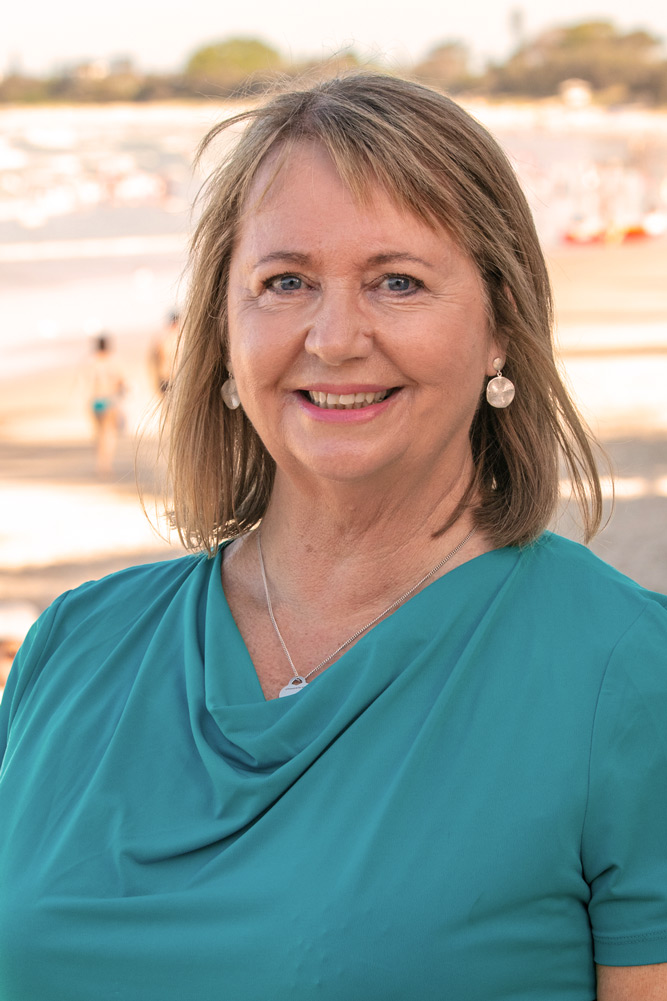 With a deep and abiding love of the beach and a passion for cosmetics, Kate is the perfect person for anyone wanting to look good whilst remaining sun safe on the beach! On the coast for 17 years, she is kind, bubbly and a joy to talk to, easily developing a lasting rapport with new and existing customers. Empathetic to the needs of others, she is a well-respected and valued member of the team.

A member of the local swimming club, Kate can be found cooking and meeting up with friends, travelling and looking forward to her son’s visits from University. 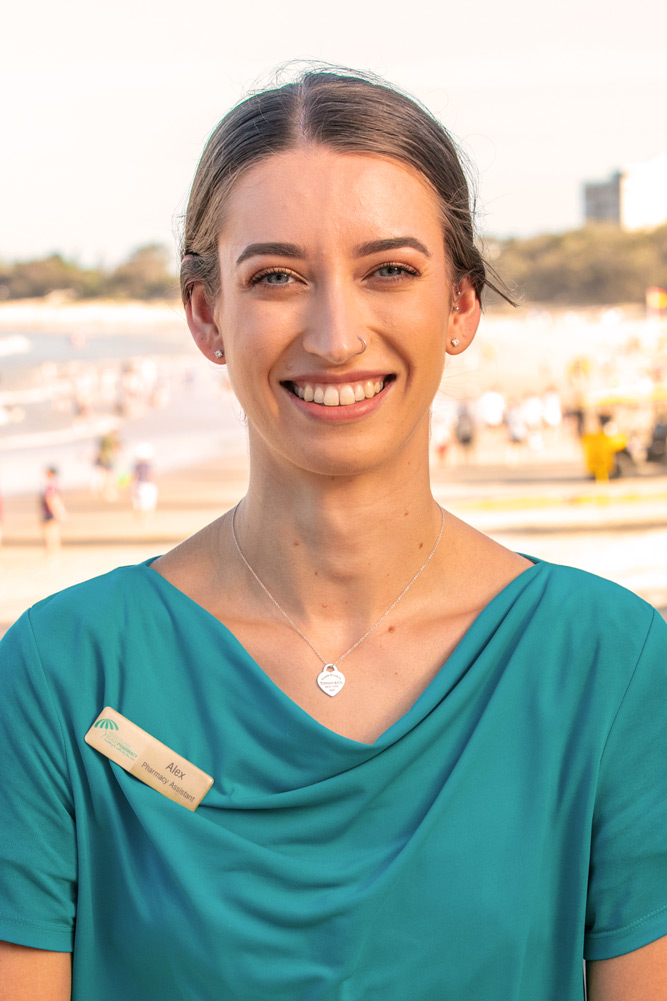 Alex is walking proof that the Mooloolaba Beach Pharmacy is the best place to work on the coast, having been with the team since she was 15. She has developed a vast interest in pharmacy and healthcare ever since. As a born and bred local, this kind and happy human loves creating connections within her tight knit community. ‘I enjoy being able to come to work and help all our wonderful customers.’

With over seven years of experience, a Certificate III in Allied Health and up to date knowledge, Alex is a truly giving soul. When she’s not at the Pharmacy, she can be found at the beach or climbing the area’s mountains. 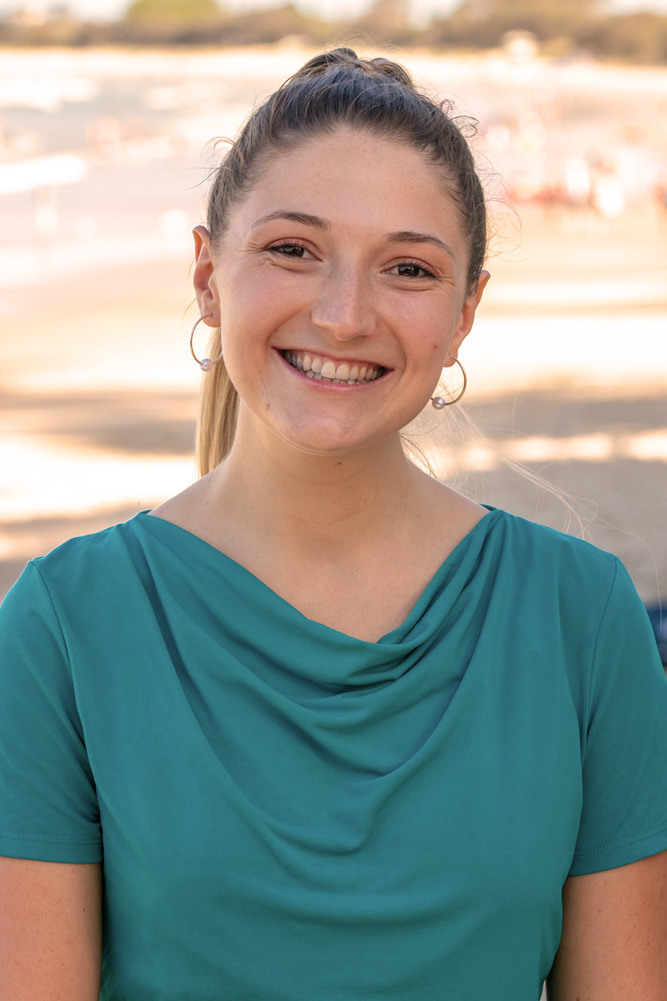 Caity has worked in pharmacy for over four years, and when coupled with a love of nutrition and the beach, she is an excellent source of advice and information about leading a healthy lifestyle. Passionate about health with a friendly, helpful demeanour, Caity has been a wonderful addition to the team. As a newcomer to the Sunshine Coast, her thoughts on Mooloolaba Beach Pharmacy’s role in the area are particularly significant: ‘I love the family feel to this chemist… There is a really special connection with the locals; this chemist is a part of their daily walk and they feel at home here.’

With a Certificate III giving her a strong knowledge in all areas of community pharmacy, along with her love of the surf, Caity is an excellent person to ask about anything from vitamins, sunscreen to wind direction.